I just got back from a very productive and fun time at Sun N’ Fun 2015 in Lakeland, Florida.  Here is the play-by-play.

I drove 10 hours on Wednesday since the plane that I was going to fly to Lakeland is being repaired from a mishap by another pilot.  I arrived at the hotel around 9 pm and went straight to bed beat from the drive and resting up for the next two hot, long days in the Florida sun.

I arrived at Sun N’ Fun bright and early Thursday morning.  Man, this place is a paradise for pilots!  Ultralights and powered parachutes were buzzing around over the parking lot and several planes were arriving for the fly-in.  Unfortunately, it immediately started raining hard and grounding everything for a couple of hours.  I found myself taking shelter in the International Association of Missionary Aviation (www.iamanet.org) tent.  This tent housed all of the kiosks for the different mission aviation groups.  I talked to several different individuals and made some great contacts and referrals, as well as, received some great advice.  I actually found out that the focus of Great Commission Aviation is called “Micro-Aviation” and that we are encouraged to develop this area.  We will be joining IAMA in the near future.

After the rain let up, I headed over to the Light Sport area and immediately began gathering information on the different aircraft.  Some interesting things that I found include the Rans S-20 (www.ransdesigns.com).  This is a side-by-side seating taildragger bushplane that would be a good fit for Missionary Micro-Aviation.  Here is a pic of the interior of a Rans S-20:

I also received a lot of information on GYROPLANES.  I had not really looked into these before but, man, are they cool!  They take off in less than 300 feet and land in 0-50 feet.  While they are considered experimental aircraft in the US, they are certified in most other countries and factory-built aircraft.  I got to take a demo ride in an Autogyro Calidus (the pic below) (www.auto-gyro.com/en/):

Here are some pictures from my flight: 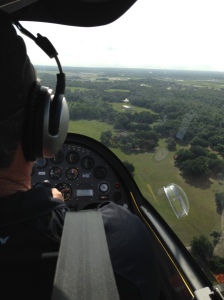 Gyroplanes’ lift comes from a constantly autorotating rotor wing versus a fixed wing.  Therefore, the gyroplane cannot stall.  It also can fly extremely slow.  Finally, the gyroplane is virtually turbulence-proof.  I was flying on a hot Florida day which would have been really bumpy in a light-sport.  However, due to the rotor system, turbulence is barely felt.  If it wasn’t for some strange bureaucratic issues with the FAA, these would be more awesome!

Here are pictures of the Xenon Gyroplanes (www.celieraviation.pl/): 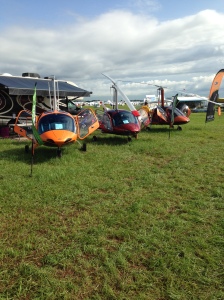 Of course, I also visited with the Zenith representatives (zenithair.com/).  These planes are still the frontrunners for Missionary Micro-aviation, and have been used as such for several years.  The Zenith 750 was the plane I researched the most.  Here are some pics of the Zenith 750: 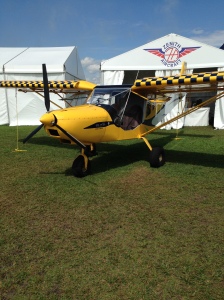 There were large crowds looking at all of these aircraft.  Of course, this was just the tip of the iceberg of the hundreds of exhibitors at Sun N’ Fun.  That doesn’t count the daily airshow, which included numerous acrobatic acts, the Breitling Jet Team and the Thunderbirds!

I spent two days (10 plus hours each day) at Sun N’ Fun.  I walked more than 10 miles and didn’t get sunburned too bad.  Unfortunately, it was 90 degrees and sunny on Friday and 57 degrees and rainy in North Carolina on Saturday when I got back home.  I am already missing the Florida weather!

I will be following up on the many contacts I made this past week and starting the decision process on Great Commission Aviation’s first aircraft!

On a final note, Great Commission Aviation is now a Not-For-Profit Corporation in the State of North Carolina.  We will be processing our 501(c)(3) application in the next few months.

Well, I finished the Instrument Rating Ground School this past Monday and have the endorsement to take the Instrument Rating Knowledge Test.  However, I will have to delay to next week taking this test (and the Instrument Ground Instructor test) since I am heading to Sun N’ Fun today!  Sun N’ Fun (www.sun–n–fun.org/) is a huge aviation convention and airshow in Lakeland, Florida.  It is estimated that more than 250,000 people attend this event.  I am going because there are several hundred exhibitors of aircraft kits, components and training.  It will be a time to make contacts and complete a lot of research for potential mission aviation equipment.

I had planned on flying to Lakeland (about 4 hours total, including a fuel stop) but someone “broke” the airplane that I had reserved.  Instead, I get to drive 9-plus hours today and 9-plus hours back on Saturday.  I will be extremely tired but I pray that this trip is productive and, let’s be honest, fun.