Only 2 weeks remain until the start of Intro to Mission Aviation/FAA Private Pilot Ground School at Southeastern Baptist Theological Seminary.  We will meet on Thursday, September 10 from 6-9PM and the following 11 Thursdays.  Cost is only $99.  Learn what it takes to be a pilot in your mission field and learn the required technical information to complete the FAA Knowledge Exam for Private Pilot!  See you there! 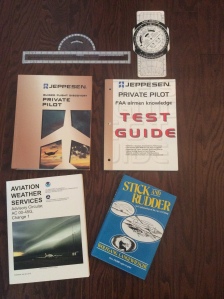 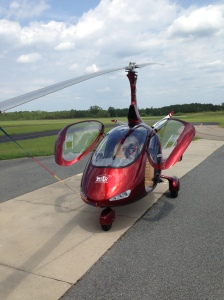 Today I had the opportunity to meet with a group of guys who call themselves the “Carolina Barnstormers.”  These guys are all protagonists of “gyroplanes.”  What is a gyroplane, you ask?  According to the FAA, a gyroplane is “an aircraft that achieves lift by a free spinning rotor.”  Therefore, a gyroplane has a rotor like a helicopter but the engine does not spin the rotor, it is free spinning.  The gyroplane has an airplane-style propeller on the back of the aircraft that “pushes” the aircraft forward.  In this manner, they are flown more similar to fixed-wing airplanes than helicopters.  They are also MUCH cheaper to acquire and operate than helicopters but deliver many of the benefits of rotor-wing flight.

I was able to fly in an AutoGyro Cavalon, which is seen in the picture above.  This gyroplane is a side-by-side seating arrangement like most general aviation airplanes.  Although it has much more room in the cabin than typical Cessna and Piper airplanes. 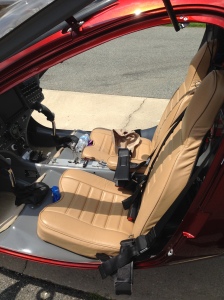 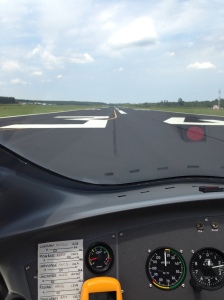 Here is a picture of us ready for departure.  The rotor is “pre-rotated” to approximately 200 rpm’s and then the forward movement of the gyroplane by the propeller accelerates the free-spinning rotor to take-off speed.  The visibility out of the Cavalon was excellent compared to most airplanes I have flown, with only the tailwheels I flew a few weeks ago coming close. 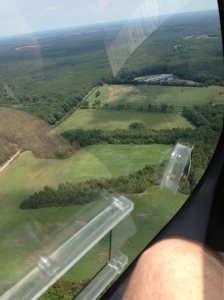 Another great thing about gyroplanes; look at this picture and see if you notice anything “odd?” 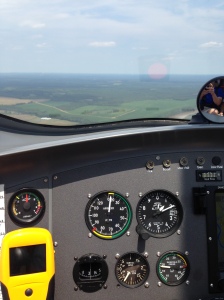 Yep, we are at 1,200 feet with 0 airspeed.  While gyroplanes cannot “hover” like helicopters due to the autorotating rotor, gyroplanes, in essence, will not stall when the speed decays.  The rotor continues to spin and the aircraft simply descends.  Therefore, engine failures are much less of an emergency than in a fixed wing aircraft.  We were able to look for a small landing spot, pitch over to build up some airspeed in order to flare for a landing and, in an actual engine-out, make a normal landing.

So what are the advantages to gyroplanes?  First, they are able to take-off in very short distances, usually around 300 feet.  They are able to land, though, in an area about the size of a tennis court.  In many of the bush-type airplanes that we train in for the mission field, the landing is the most difficult and technical arena.  Not so in a gyroplane.  Second, in emergency situations the gyroplane is much easier to handle for landing.  Finally, they maneuver more like helicopters rather than airplanes, which means they are very maneuverable and have even been called the sport-bikes of the sky.

Negatives?  They are small, only holding two people.  But then again, so are the general aviation aircraft we are looking at.  Second, as with small helicopters, forward speed maxes out around 90 knots.  Finally, they do not hold much in the way of baggage.  Once again, though, they do hold about the same amount of baggage as the tailwheel airplanes in which I just trained.  The biggest negative with gyroplanes is that they have been the proverbial step-children of the FAA for the past few decades.  In the rest of the world they are seen as very capable aircraft but not so much in the US.  Hopefully this will change in the near future.  What do you think about gyroplanes?  Do you think Great Commission Aviation should look into this form of aircraft for training?  I would hope that we may see gyroplanes incorporated into our version of micro-aviation training in the near future.

Intro to Mission Aviation/FAA Private Pilot Ground School will begin 3 weeks from today in Adams 112 at Southeastern Baptist Theological Seminary!  Class time is from 6PM-9PM on Thursdays.  Cost is only $99.  Send us an email at greatcommissionaviation@gmail.com to register!

Liani, the kids and I were able to take one of the flying club’s Piper Warriors up for a sunset flight Saturday evening.  While it was a bit hazy, we still enjoyed the time and got to take some good, but not great, photos of God’s creation.  Here are a few: 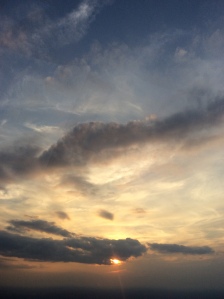 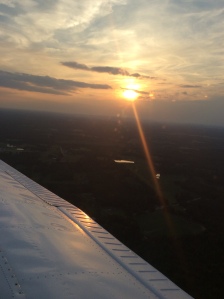 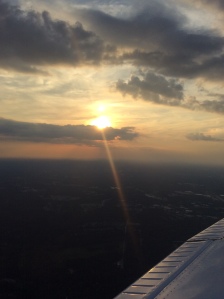 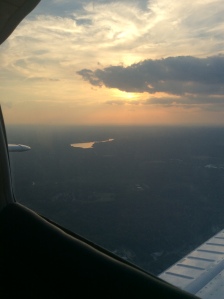 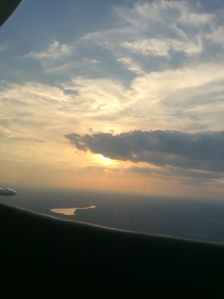 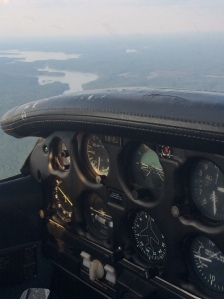 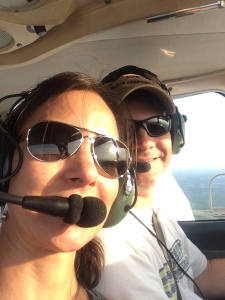 In order to qualify for the Commercial Rating, I need to build some more experience.  Friday, a friend of mine and I flew to Hickory for a cheeseburger at the Crosswinds Cafe.  Here are some pics from the flight:

This past week I spent two days having the most awesome flying experience!  I flew over 13 hours and made 97 landings (all but 3 were on grass, dirt or sand) while learning to fly a tailwheel (or taildragger) airplane.  I flew 3 different planes, but all were substantially copies of the Piper Cub.  Here is one of the planes I flew: 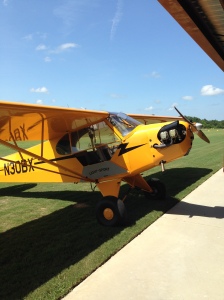 It takes A LONG time for a pilot of standard tricycle gear airplanes to learn how to land a tailwheel.  It is VERY frustrating and tiring.  You are using the rudder pedals so much it feels like you have done several hundred leg presses at the gym.  My legs felt like spaghetti and I was drenched in sweat at the end of each day.

In addition, my training included short field and backcountry flying.  True missionary aviation!  I learned to fly close to the ground like a cropduster: 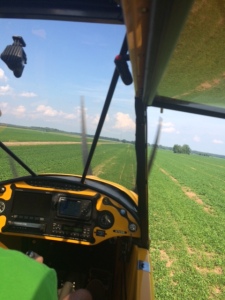 and to fly into unimproved “airstrips” like this field next to a country church: 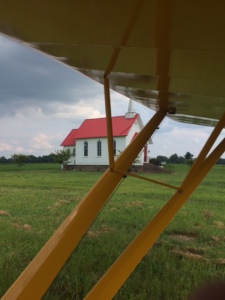 The grass in that field was up to the door of the plane.  We had to use a special technique of lowering flaps to “elevate” the plane enough to get it out of the grass.  We then flew between two crops of trees out over a river to gain airspeed.  I also had to learn to fly into extremely short airstrips like this one: 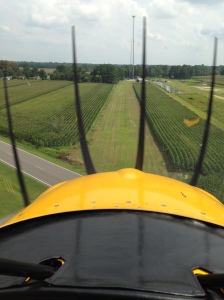 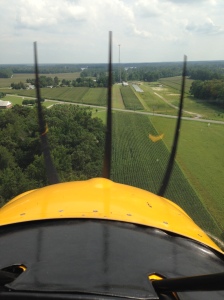 Yep, that is a cell tower at the end of this little strip.  You flew in over the road (looking for traffic) and had to stop before getting to the cell tower.  This is a one-way-in and one-way-out strip.  Here is another strip in the middle of a corn field: 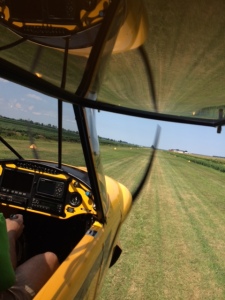 It was a little easier compared to the others.  We also looked for bears, deer and red wolves by air.  It was the greatest learning experience I have had flying and it is techniques that I hope to share with future preacher pilots.  My instructor told me about a preacher and a doctor who both flew little planes just like this all over Eastern North Carolina ministering to the farmers and locals.  This is exactly why Great Commission Aviation exists.  It also never hurts to end two-days of exhausting training with views like this: 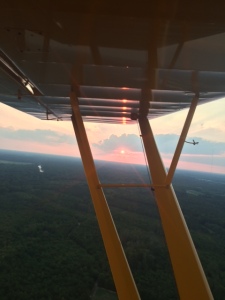