It has been a couple of weeks to decompress and time to write the blog!  Laundry has been finished, bags are unpacked, and most time consuming, work has been caught up.  A LOT happened during my 2 weeks in Florida, so be prepared for this to be longer than usual.

As told in previous posts, I have been assisting Anthony Croenlein of SkyBlazer Aviation in his quest to import BrakoGyros from Italy.  He assembled 3 of these gyroplanes and wanted to take 2 (a single-place Sprint and a 2-place GT) of them to Bensen Days and Sun N’ Fun in Florida to show.  Only 1 of the gyros would fit in his trailer, so I volunteered to fly the other down for the 2 weeks of shows.

It was decided that I would fly the single-place Sprint down and the 2-place GT back.  So, early on the morning of April 2, I departed KLHZ in the orange Sprint.

A storm front was scheduled to pass through the following day, so I knew that the winds were forecast to be strong, but I did not foresee a 45mph headwind!  It took me 7 hours to get to Brunswick, Georgia.  The crosswinds were so strong in Brunswick that I couldn’t keep the gyroplane straight on the runway during my take-off roll!  I was standing in the terminal thinking about my options (including taking-off from a taxiway) when Anthony called to let me know that he was stuck in traffic on I-95 (a wreck stopped the freeway; he moved 4 miles in 3 hours!) and that he would not make it to Florida until the next day.  That sealed the decision to spend the night in Brunswick and finish the flight on Tuesday.

The next morning, the fog didn’t roll in (thank goodness) and I was able to depart about 8AM to finish the flight to Wachula, Florida.  After another 4 hours of flying, I finally arrived at Bensen Days in Wachula early afternoon.  There I met up with Chris Lord and family and other gyroplane friends to set-up for the week. 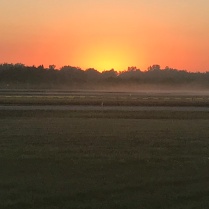 Bensen Days is an annual event hosted by the SunState Rotor Club.  It is a celebration of all things gyroplane.  Several hundred participants and spectators descend and camp-out in this sleepy little town of Wachula for a week of gyro-flying.  SkyBlazer went to introduce the American market to the BrakoGyro.  I was able to assist the vendors and SkyBlazer by helping set-up, fly demonstrations, talk about flying and flying gyroplanes and generally assist around the event.  One of the biggest highlights was meeting the personnel at Harvest Aviation (www.harvestaviation.org).  This organization is headquartered in Wachula and flies mission supplies internationally and trains mission pilots.  I spoke at length about the use of micro-aviation in the mission field and their chief pilot, Chuck, is coming to North Carolina in May to train with me in gyroplanes!

Bensen Days continued through Saturday and we were beginning to grow tired but knew that we still had a full week of Sun N’ Fun to go.  On early Sunday morning, Chris Lord, Bob Snyder of Autogyro, John Brewer and Tim Verroi (Tango Victor) flew the orange Brako, an Autogyro MTO, an Autogyro Cavalon, ELA Eclipse-10 and a Butterfly gyroplane as a group up to Lakeland from Wachula.  This flight is about 30 miles and the gaggle of 5 gyroplanes was a sight to behold.  John in the Eclipse and Tim in his Butterfly separated from the group to land in Choppertown at Sun N’ Fun while Chris announced the “flight of 3 gyroplanes” inbound to the main runway.  We all three landed together (sort of) on the huge runway and taxied to Paradise City (the ultralight and light-sport area of Sun N’ Fun).

As you guys have read in the blogs, I have been to Sun N’ Fun several times researching aircraft and the industry for Great Commission Aviation but this was an exciting first-time of being involved directly in the show.  Anthony arrived later in the day with the camper and we set-up in the Campground area of Sun N’ Fun ready to get prepared for the upcoming week. 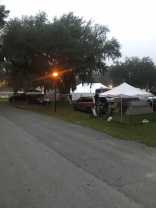 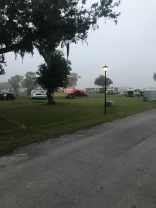 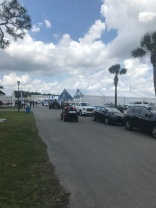 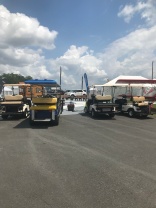 As I have said before, Sun N’ Fun is huge!  While not as big as Oshkosh, it is still an amazing assortment of aviation enthusiasts and vendors.  We camped next to a father/daughter who were there representing a cargo aircraft that flew in the Berlin Airlift!  He owned a TBM Avenger WWII torpedo-plane and had previously owned an A-26 WWII bomber!  They were a great family to visit!

Unfortunately, we lost Tuesday due to horrible weather; it poured all day!  However, the following 4 days were absolutely perfect; 80 degrees and sunny! 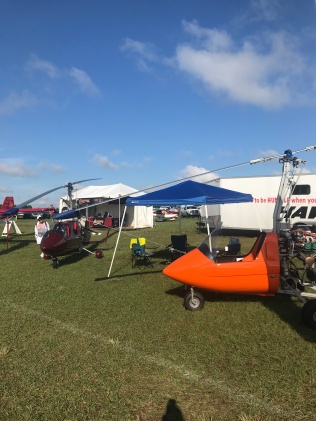 Once again, I spent the week discussing gyroplanes, flying, helping volunteers, making contacts, and being known as the “preacher/pilot.”  It was a great opportunity to serve and minister.  Here are a few more pics from the week: 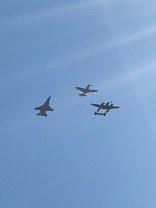 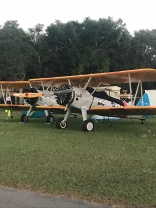 I do want to specifically mention one episode during the week that affirmed all that we have been working toward with Great Commission Aviation.

I visited the IAMA Mission Tent several times during the week.  This tent is where all of the mission aviation organizations set-up booths to discuss their ministries.  I made great contacts with several new and existing organizations.  While speaking with Tim Huggins of the College of Missionary Aviation (www.floridaaviationcollege.com), he informed me that the College had been donated a gyroplane for training!  The purpose of this gyroplane was to start students down the path of helicopter training.  I worked on convincing Tim that this type of aircraft, and other micro-aviation aircraft, were perfect mission vehicles themselves!  Tim informed me that the gyroplane was going to be delivered during Sun N’ Fun and we decided it would be a great idea if it was parked in front of the mission tent for publicity.

You can’t even imagine my elation when I saw this the next morning:

Later in the day, I went by to see the reaction of visitors and was greeted with this:

Everyone wanted to know what it was and were excited to see it!  I spent the next hour describing gyroplanes and the use of aircraft like this in the mission field.  Since I was there to assist Anthony and SkyBlazer, though, I had to excuse myself and get back to work!  Future shows, this is the goal!

I was glowing the rest of the day to see a vision God had given me several years ago appear at Sun N’ Fun.  Now I know that we are to continue down this path and expand Great Commission Aviation into a larger role.

The final day of Sun N’ Fun, Sunday, was greeted with another storm system.  The weather guys were predicting strong thunderstorms for later in the day and the organizers actually cancelled the show early in anticipation of the storms.  I had already planned with Chris to fly the GT 2-place gyroplane to his hangar in Sebring to wait out the storms.  I left early Sunday and actually attended church with Chris in Sebring and then helped out around the hangar the rest of the day. 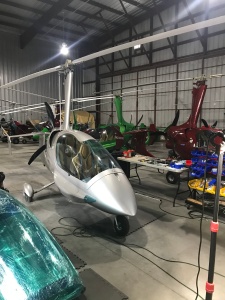 When I woke up on Monday, I was greeted with more extremely high winds, but now out of the north!  I did not want a repeat of my flight down, so I delayed my return to North Carolina until Tuesday.  I spent Monday still working with Chris and helping wherever I could.

I departed Tuesday early for the flight back.  While the headwinds were gone, the crosswinds and turbulence were horrific!  I had to keep my speed down due to the turbulence and it took 9 hours of flight time to get back.  I arrived back in Louisburg at 6:30pm and could barely walk from the long flight.  The family was glad to see me and I was glad to see them!  We put the gyroplane in the hangar, went to dinner and immediately to bed!

As I look back, I am astonished at the journey over the past few years.  God called us into a facet of mission aviation called “micro-aviation” and the creation of “preacher/pilots”.  Just a short-time later, that is my nickname; the “preacher/pilot.”  Last year, at Sun N’ Fun, I was introduced to Chris Lord.  Since that time, I have added the flight instructor sport rating in gyroplanes and have been able to fly gyroplanes in Florida, Florida to North Carolina, North Carolina to Tennessee, and at Oshkosh!  I continue to train and fly airplanes, as well.  It has been a busy year but exciting to see God moving!  Let’s pray that God continues to bless and expand the mission of Great Commission Aviation!