After I finished my CFI-Gyroplane training with Chris in Sebring in May, I asked if he needed any assistance at the EAA Airventure 2017 in Oshkosh, Wisconsin.  He responded with an enthusiastic, sure, and planning started.  Now, for those of you that do not know about Oshkosh, I have included the following stat image from the EAA: 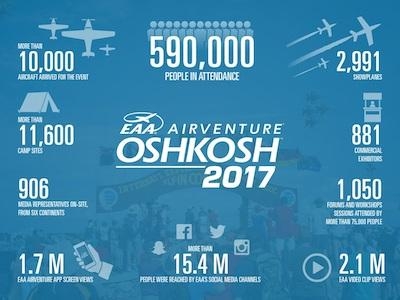 Needless to say, it is a BIG DEAL!  Every pilot dreams of attending Oshkosh at some point.  During the week of the convention, Oshkosh, WI, becomes the world’s busiest airspace and control tower.

I went with two priorities: 1) to assist in promoting ELA Gryoplanes with Chris Lord and http://www.gyroplaneguy.com,  and 2) to promote the use of light aircraft in mission aviation.

So what did I do there?  The “show” lasted from Monday, July 24 through Sunday, July 30.  I arrived by airline on Monday morning and flew demonstration flights from Tuesday through Saturday 11:30AM – 2:00PM each day.  When I wasn’t flying, I was talking to potential customers and other aviators from 7:30AM to about 7:30PM each day. 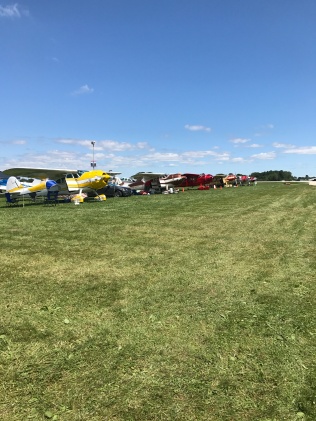 The amount of airplanes is overwhelming!  Above is a row of Cessna 195’s from the late 1940’s and on the right is a row of Piper Cubs.  There were several rows of Cubs; 2017 is the 80th Anniversary of the Piper Cub and they came in droves! 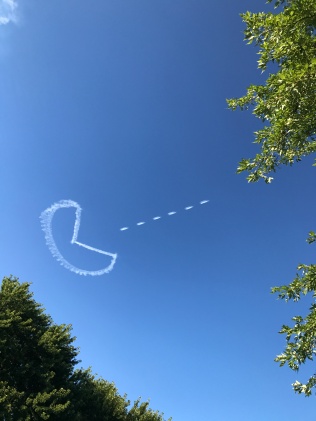 I had never seen an actual skywriter before and this is an example of their artistry every day.  I also had never seen this many WWII trainers in the air at one time.  It looked like something from a history book. 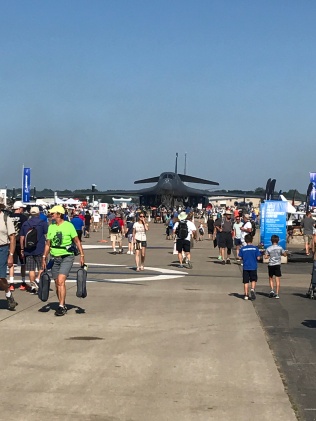 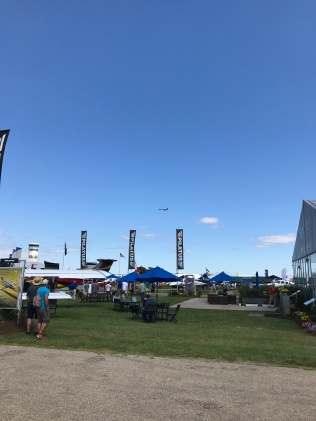 Just a couple of pictures from the main booth area of the convention.

My demo flights consisted of taking-off from one of the main runways at Oshkosh (Runway 18-36), usually with one or two other gyroplanes together to lessen traffic.  The air traffic at Oshkosh is so busy that they have airplanes line-up on both the right and left side of the runway and take-off every few seconds.  When us gyroplanes could take-off as a group, it really helped the controllers.

We would then depart Oshkosh airspace to the South, perform some low-level gyroplane maneuvers (air traffic wanted us to stay below the fixed wing traffic of 1,300 feet; we were usually around 500 feet) and return to Oshkosh to re-enter the “ultralight” pattern.  This pattern flew over Camp Scholler and the many RV’s (seen above) and utilized a 900 foot grass runway.

When I wasn’t flying, I was talking about gyroplanes, aviation and mission aviation.  I made several contacts with mission aviators and missionaries who all loved the idea of gyroplanes (and other micro-aviation airplanes) in the mission field.  I will follow-up with these contacts in the coming months.

On the final Saturday of the show, Chris, Bill (another ELA Eclipse gyroplane owner) and myself ferried (flew) three of the aircraft back to Chris’ farm in Illinois.  It was a beautiful 1.5 hour trip across Wisconsin and Illinois countryside.  That flight culminated in a landing on a farm strip that was shape like the inside of a bowl on the side of a hill (about 700 feet long).  It was bush flying for a gyroplane!

The aircraft were going to go on the following Monday to Mentone, Indiana, and the Popular Rotorcraft Association (PRA) Convention.  I, however, caught a Southwest flight from Milwaukee back to Raleigh (via a connection in Orlando).

What’s next?  Looks like more training opportunities in the gyroplanes.  We have had a lot of interest in training.  There is also building interest among Seminary professors and mission aviators regarding the use of micro-aviation and gyroplanes.  I will schedule a flying demo for these contacts within a couple of months.  Remember to pray for our ministry here and give monetarily when possible.